Although language seems to be uniquely human, there are other species with whom we share, though not all, same properties of language.

Truth: Recursivity may be found in some birdsongs. Male nightingales have about 200 different types of songs which are in part learned. Their singing is structured into their memory in 4 hierarchical levels: song-sections, songs, packages, context. (Hauser, as cited in Desalles, 2009)

“ We don’t think the female is concerned with the beauty of the song but rather the information encoded in the song that tells her about the singer’s characteristics – his age, where he was raised, the strength of his immune system and how motivated he is to contribute to bringing up the young. ” Professor Silke Kipper

Statement 2: Human language is unique for its non-iconity. There's no relation between the word 'duck' and the animal 'duck'.

Truth: Vervet monkeys have different calls for different predators. These calls are not, as far as we can tell, iconic. They don't resemble any sounds of the predator they're referring to. These small monkeys have a varied range of cries that they use for warning. The meanings of these alarms are precise. Their reaction varies with the warning. According to the cry sound, they either take cover ( warning of an eagle) or straighten up ( for snake attack) or climb up to trees ( leopar assault). It was thought for a long time that these calls expressed nothing more than an emotional state. The experiments showed that these were genuine signals. 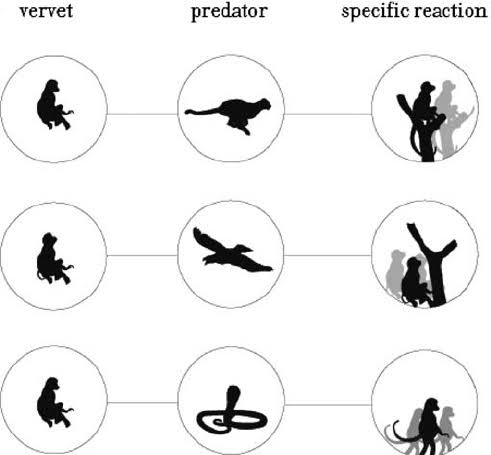 Statement 3: Animal communication is represented as reflex behavior. In the vervet monkeys' communication example, one can reduce the effect of the signal.

Truth: Such description (mostly by behavioral psychologists) turns out to be simplistic. Two successive mechanisms can intervene between a signal and any behavioral response.

A monkey which hears the cry associated with snakes looks at the ground in its vicinity, so as to localize the danger; it doesn't dash away as it would if its flight behavior was a reflexive. It imagines a snake and looks for one. If the context gives no reason for assuming that a snake is nearby, the monkey may not flee needlessly.

2) Assesment of the signal

Words spoken by someone make us summon up mental representations which we evaluate. When we hear on the weather forecast the words '' Balkanlardan gelen soğuk hava dalgası'' , we first construch a representation of the situation, then we assess the unpleasant consequences it will involve for the weekend.

Why human language is not unique?

Disadvantages of boasting and feeling special

In today's world, distinguished people with special abilities and the possesions are all the go. Thanks to the socia..